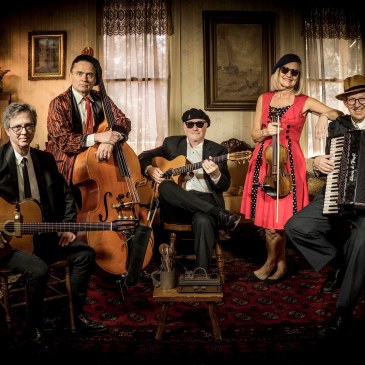 Djangolaya was founded  in 2014 at Django in June, a music camp dedicated to the music of Django Reinhardt.   While at this annual gathering of amazing musicians in Massachusetts,  three musicians discovered that they actually lived only a few minutes from each other in the Maryland suburbs of Washington.   Drawing on relationships with friends and other great musicians, Djangolaya  presents a wide range of musical configurations from an intimate trio to a six piece ensemble that really swings.  We often draw on our large network of gypsy jazz enthusiasts to augment our group to suit any occasion.

A talented singer and violinist, Jeanine is equally comfortable with the styles of the Paris bistro, Big Bands, or vocal harmony groups.   In addition to playing with Djangolaya, Jeanine is featured in the Tom Cunningham Orchestra, and YazooZazz.

One of the leaders of the DC Gypsy Jazz Community, Charlie is passionate about the revival of accordion in both traditional and contemporary music.  When not playing accordion, Charlie plays piano with his own quartet, and other jazz musicians in the Baltimore/Washington  area.

Andrew is a master of “Le Pompe”, the pulsating rhythm guitar playing that characterizes the music of Django.   When not playing with Djangolaya, Andrew is also the anchor for the Hot Club of DC providing the rhythmic foundation for their blazing solos.

James Key has been playing music throughout the DC area for over 25 years.  He’s appeared on stage at the Barns at Wolf Trap, the 9:30 Club, the Millennium Stage at the Kennedy Center. A rediscovery of the guitar and one week at Django guitar camp was all it took for James to focus his efforts. You will see more of James on stage playing tunes from the Django songbook.

Our former members who have gone on to other musical adventures.

Djangolaya is an active player in the Baltimore/Washington Django Jazz scene and we often draw on our network of friends to augment our sound.